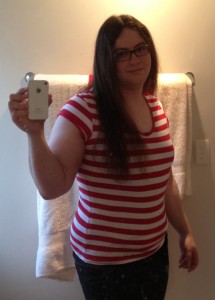 I haven’t really written that much on here lately mainly because I have been extremely busy over the past month. My changes from the hormones have continued along their accelerated path and I can’t see them slowing down any time soon.

The past month must have been the time the hormones started attacking my face and getting rid of all the maleness. My face appears much more round than it used to be and the skin complexion on my cheeks is just amazing now.

I have been experiencing constant breast growth from when I started. They are growing at a rate of nearly a whole cup size each month. The picture above doesn’t show it off that much, but from measurements, I am now a B cup.

As soon as my holidays started on the 22nd of December, I started doing a lot of things related to my transition. On the first day, I went to the registry of Births, Deaths and Marriages and handed in my legal name change form. Just before I left, I sent in an email to all of my work colleagues coming out and explaining the situation coming forward; that I would return in the new year with my legal name changed to Michelle.

The week before Christmas, I saw my mother for the first time since starting transition. This didn’t really go to well with her visibly avoiding commenting on my appearance and constantly using my old name. By the time Christmas came, I told her that I had gone to legally change my name and she finally started using my new name when she referred to me.

Also on Christmas Day was the first time I had seen my father since he even knew about my status. He hadn’t commented at all since he found out (he added me on Facebook which has many links to here). I didn’t know what to expect. While I was there, he didn’t use either my old or new name at all. The only indication that he approved was that my presents were labelled “To: Michelle.”

On Thursday last week, I received my new name change certificate in the mail. My name is now officially Michelle Rachel Allen. The problem now is getting everything changed over to that new name.

Last Friday, my friend Kit took me shopping for some women’s clothing. I got plenty of new clothes and she was very understanding of what I would be comfortable in at the moment. I also got some makeup, which I haven’t really started to use yet.

Finally, today I was woken up by a phone call from the office of Dr Russel Date. After waiting nearly four months for a call back, I now have an appointment to see him in early March.

One Response to “The New Year”

Leave a Reply to Maxine